The science behind guitar string breakage

Thereʼs never a good time to break a string, but itʼs a fact of life if you play guitar,

and typically occurs at the worst possible moment.

Everyone has their own way of dealing with the problem, but what exactly is the cause?

String breakage is caused by metal fatigue, which is due to repeated stress loading and unloading of the metal in a cyclic fashion. When metals are subject to repetitive loading (stress) in this fashion, they will ultimately fail. As a guitar string cycles (vibrates) back and forth hundreds of times per second, it stresses the metal at a localized point on the string where it leaves the saddle (the witness point). This cycle of loading and unloading leads to the formation and propagation of microscopic fatigue cracks as the metal becomes increasingly brittle (Fig. 1). 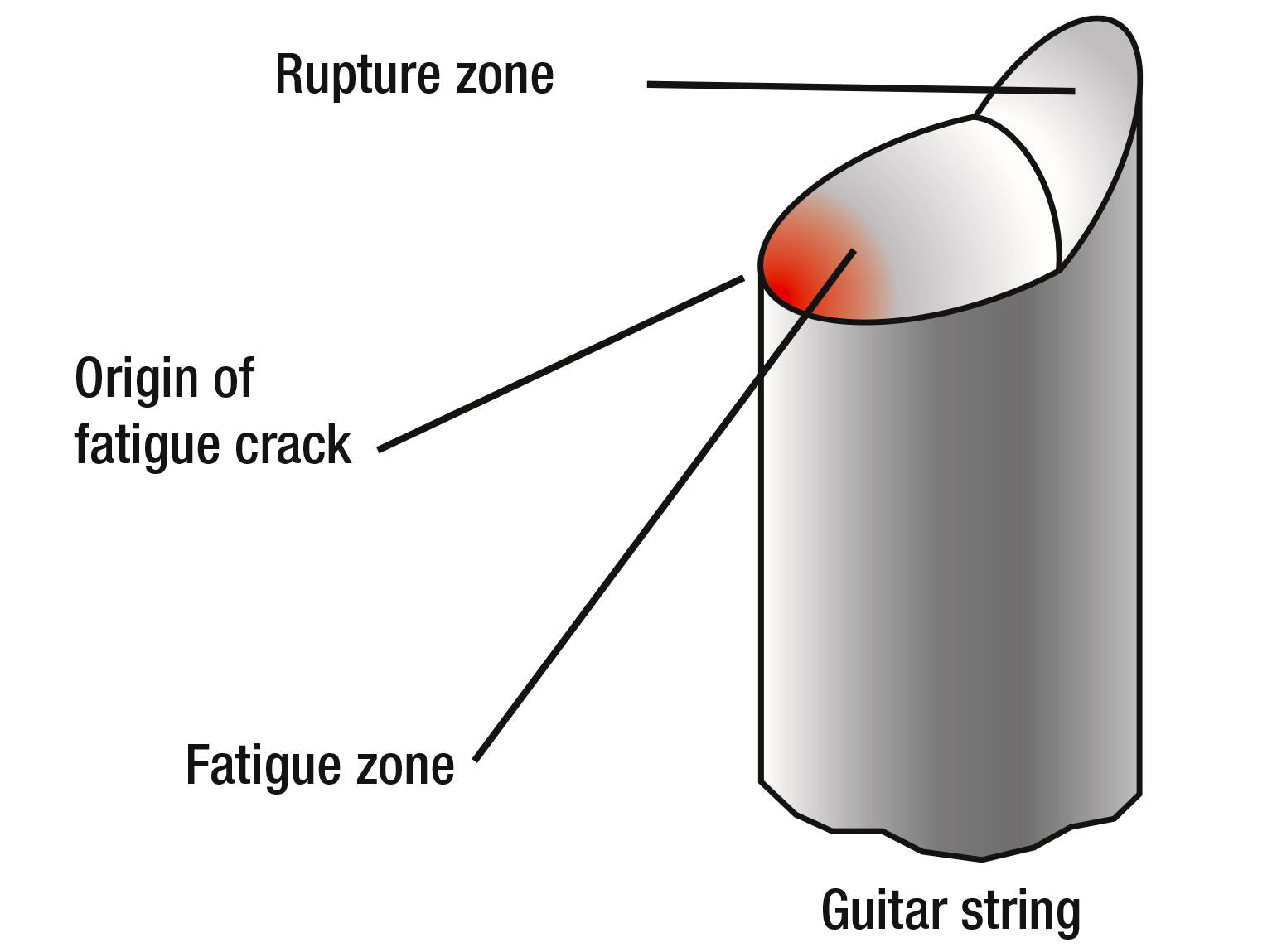 Over time and repeated cycles, the crack grows, and eventually the string breaks. Thus fatigue is a function of both stress and cycles. Metal fatigue can occur at stress levels that are well below the ultimate strength of the metal.

Metal fatigue is the result of a change in the metal at a molecular level precipitated by cyclic stresses.

An important characteristic of metal, and the one with which the guitarist is most concerned, is its ability to bend. How easily a metal bends, how hard a metal is, and how far a metal can be stretched before it breaks are all related to the atomic structure of the metal.

The atoms in metal are arranged in tightly packed crystal lattices, a uniform arrangement of atoms in a specific order that repeats itself many times. (Fig. 2) 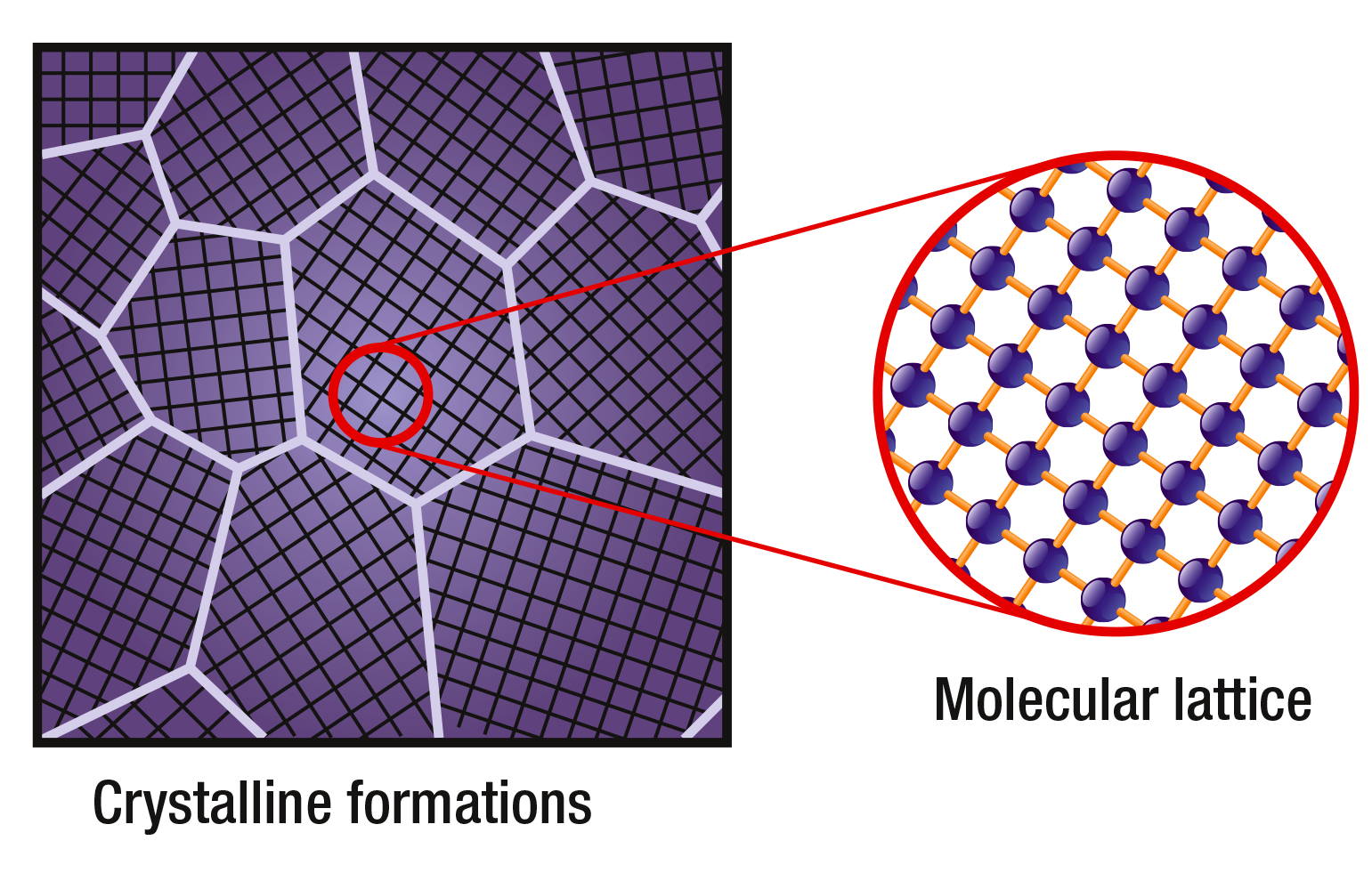 There are many imperfections within each crystal, and these flaws produce weak points in the bonds between atoms.

It is at these points, called slip planes, that layers of atoms are prone to move relative to adjacent layers if an outside force is applied (Fig. 3). 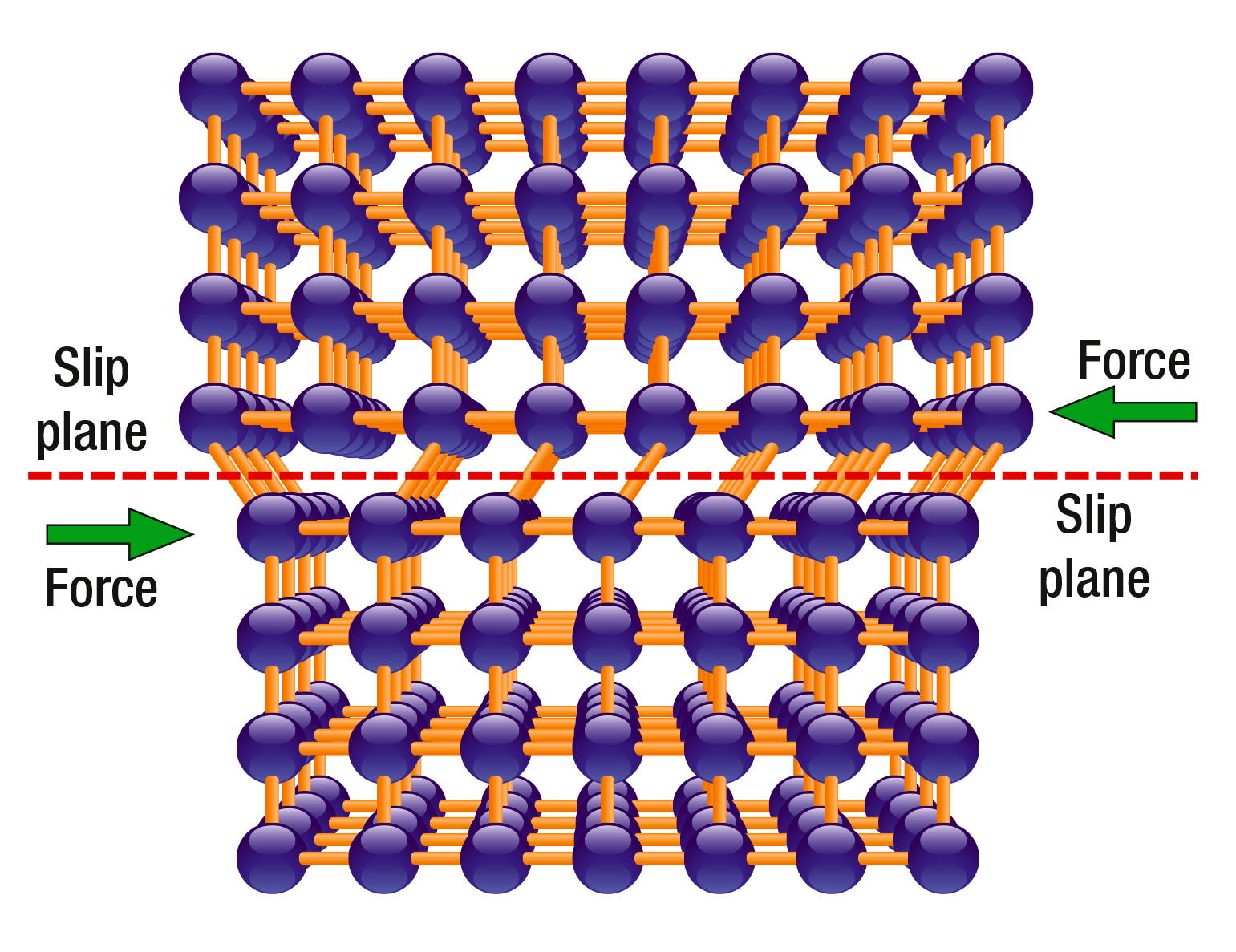 The bonds that hold the atoms in place also allow them to move, which lends metal the ability to be hammered into sheets (malleability) and drawn into wire (ductility).

When small loads (stresses) are applied to metals they deform, and return to their original shape when the load is released. The bonds between the atoms are stretched but the atoms do not slide past each other.

Gently plucking a string is an example where atomic bonds are bent or stretched by a small percentage.

This is called elastic deformation and involves temporary stretching or bending of the bonds between atoms (Fig 4). 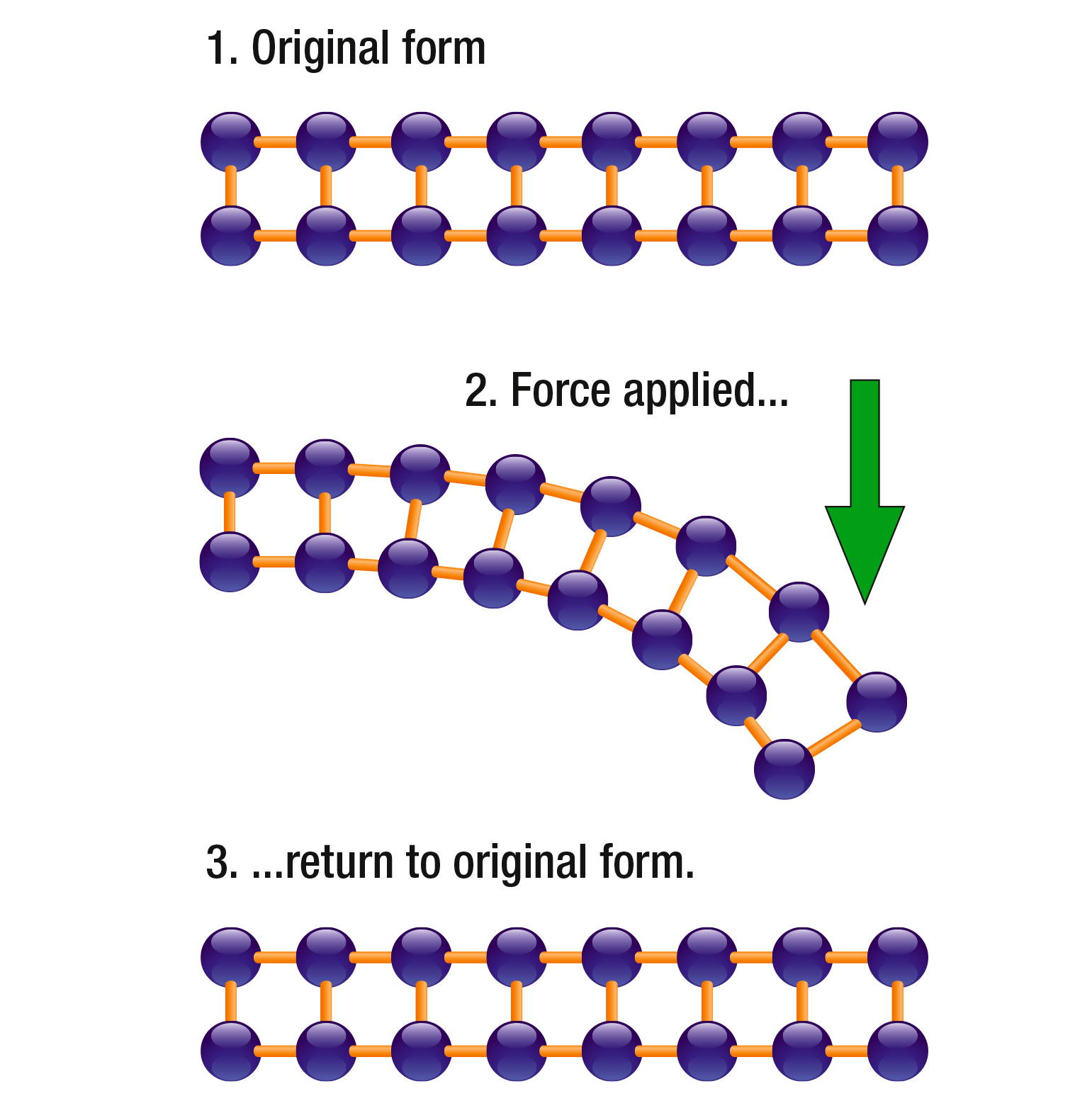 When a stress is applied that is beyond the elastic limit or yield point of the metal, permanent plastic deformation occurs. The object does not return to its original dimensions once the stress is released. The metal atoms slide past each other along the slip planes between layers of atoms when the metal is deformed (instead of fracturing like a brittle material) and new bonds are formed. The movement creates vacancies (atoms missing) and dislocations (lines of defective bonding) in the lattice and the crystals become smaller. The material becomes more difficult to bend due to the tendency of the dislocations to snag and become tangled with each other or “pinned” (Fig. 5). 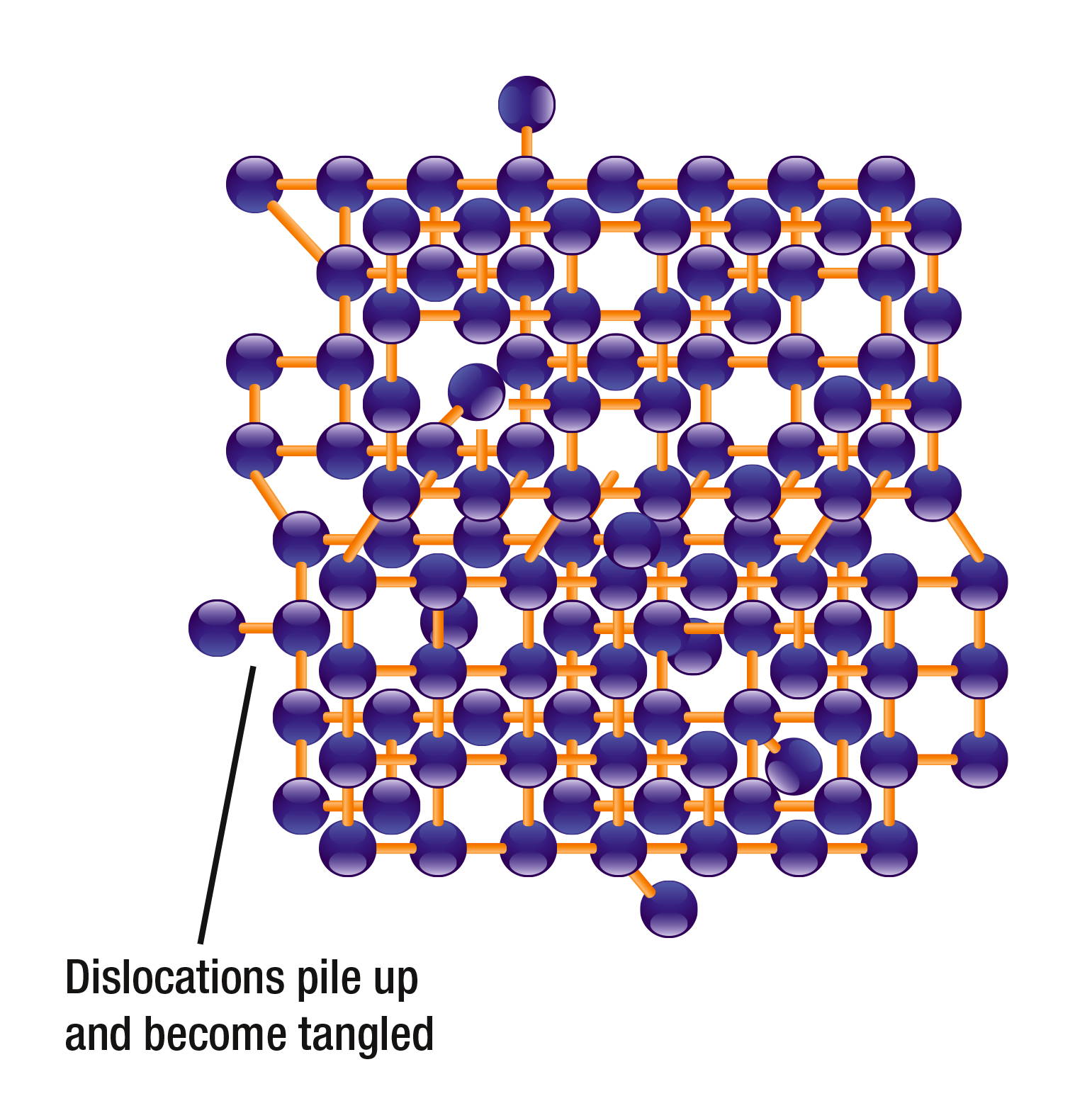 Plastic deformation actually strengthens a metal as dislocations form and become tangled and it becomes increasingly difficult for the layers of atoms to slide past each other. This is called “cold working”, and the metal is said to be “work hardened”. The more you stress the metal by flexing it the quicker it will “work harden”. The side effect of work hardening, to the detriment of the guitarist, is that the metal becomes more brittle, prone to fractures, and fatigues more easily.

When a metal guitar string is plucked, bonds in the metal are stretched and the elastic deformation and subsequent stresses created are dispersed along the length of the string. Molecular bonds in the metal force the string to return to itʼs original dimensions, but a function of momentum causes the string to “overshoot” the rest point and deform in the other direction. In this way the string oscillates, with stress repeatedly loaded and unloaded, until all the energy in the string is dissipated.

The saddle contributes to metal fatigue by binding or locking the string in place which concentrates the stresses produced by vibration at the witness point. The small stress radius when the string is pinched concentrates the cyclic loading on a small portion of the string, reducing the number of cycles to failure (Fig. 6).

A string can become bound in the saddle due to molecular adhesion, burrs or v-grooves, which prevent the string from microscopically gliding

across the surface of the saddle during elastic deformation. Lateral stresses which would normally be dispersed over a broader section of the string are focussed and build at the binding point. The molecular bonds, unable to stretch, break and plastic deformation occurs, forming dislocations in the metal which make the string more brittle and prone to fatigue cracks. Over time the string is weakened until it ultimately breaks, usually upon the application of force during playing. 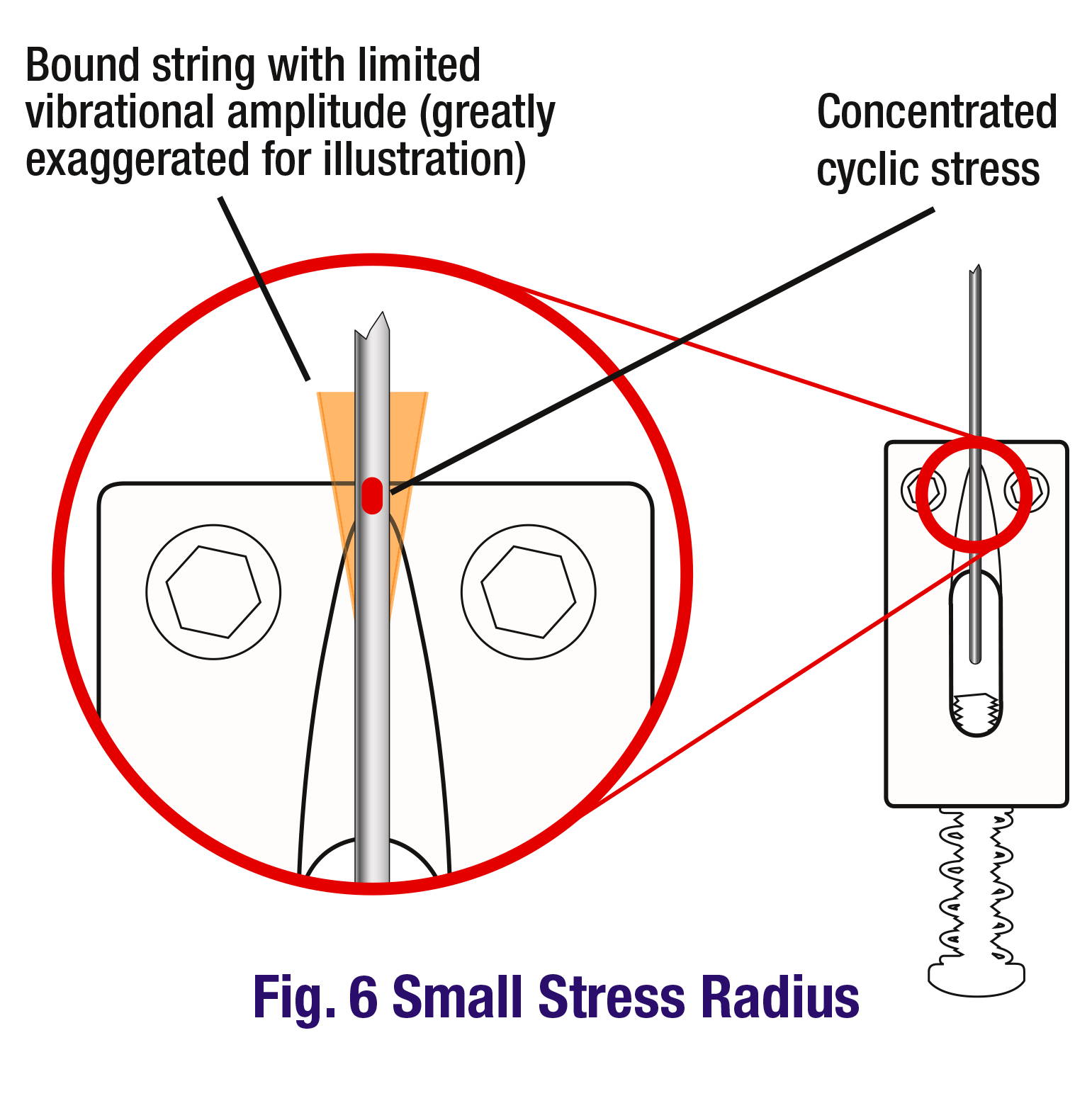 The nature of friction and its causes are not yet fully understood. The major cause of friction between metals appears to be the forces of attraction, known as adhesion, between the contact regions of the surfaces, which are microscopically irregular. Adhesion is attributed to the interactions of electrons in the molecules of the facing surfaces, and the distance between the molecules of the facing surfaces is a determining factor in the amount of force exerted. A surface that is smooth will hold its molecules close enough to a facing surface to produce an electromagnetic bond 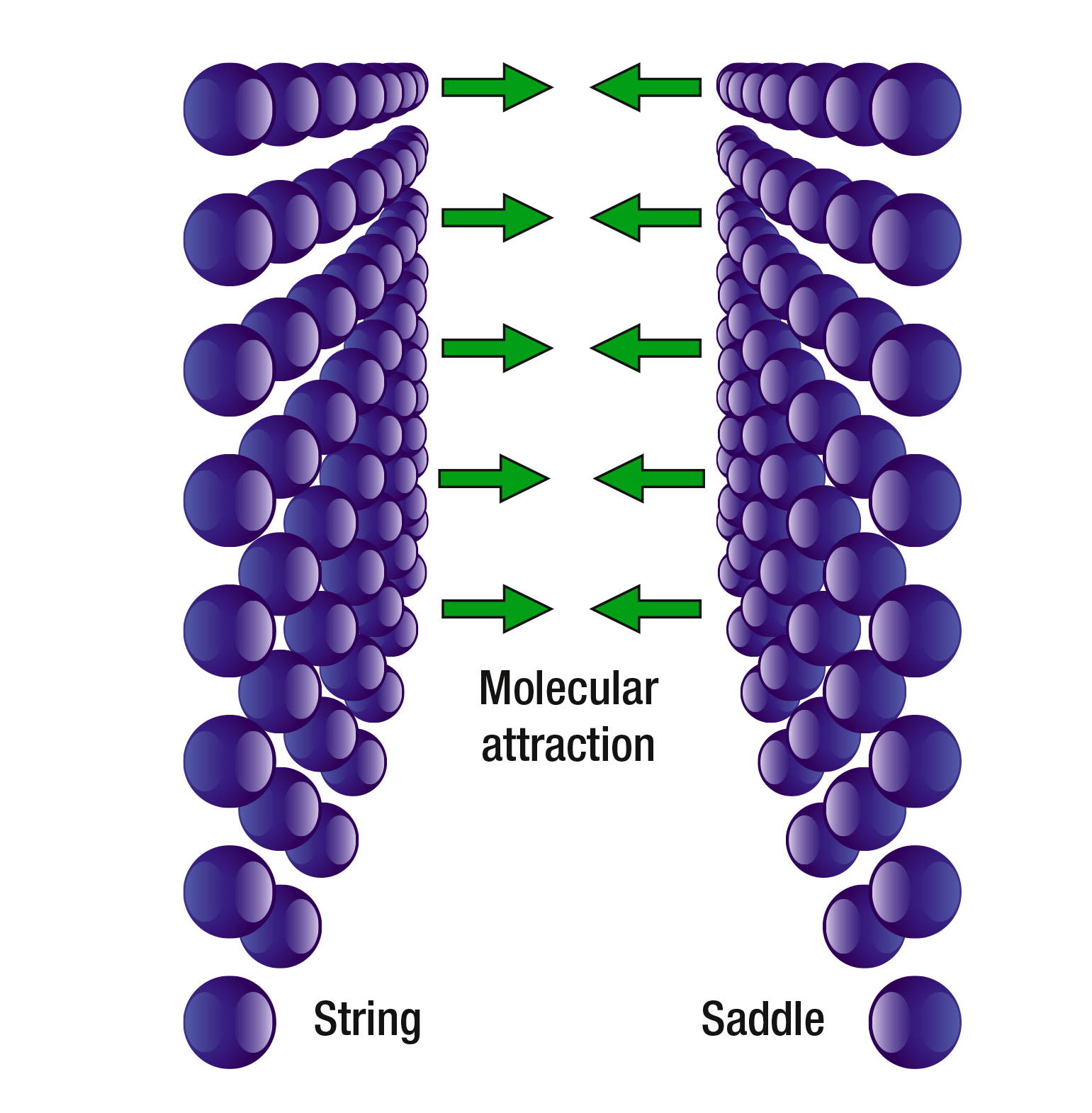 The closer the molecules, the stronger the bond or “weld” between the surfaces. This can be easily understood if one consider two sheets of glass pressed together. Their smooth surfaces create a strong bond and are thus difficult to move in relation to each other. However, sprinkle some sand between the sheets (in effect “roughening” the surface) and the sheets are easily moved.

There is evidence that friction arises from shearing and breaking these microscopic “welded” junctions and from the action of the irregularities of one surface plowing across the other surface. The minute welds form and break as one piece slides over the other. Surprisingly, for some surfaces, the smoother they are the more friction is generated. This is because the polishing of the surfaces allows for more contact and thus molecular adhesion. This flies in the face of conventional guitar wisdom which suggests that polishing the saddles to render a smoother surface will ease the grip of the string on the saddle, when physics would suggest (assuming the absence of burrs and notches, which will also bind the string) that this could exacerbate the problem.

The challenge then is to achieve the optimum “smoothness” of the facing surfaces; smooth enough that there are no irregularities to bind together, but irregular enough to limit the molecular attraction between surfaces.

Enter the magic of Teflon®.

Polytetrafluoroethylene, or PTFE, is most commonly known by its trade name Teflon®, and is the slipperiest substance known to man. It is 500% slipperier than graphite, a material commonly used to alleviate string binding.

Teflon is a compound comprised of a chain of carbon atoms that are completely surrounded or shielded by fluorine atoms (Fig. 8). 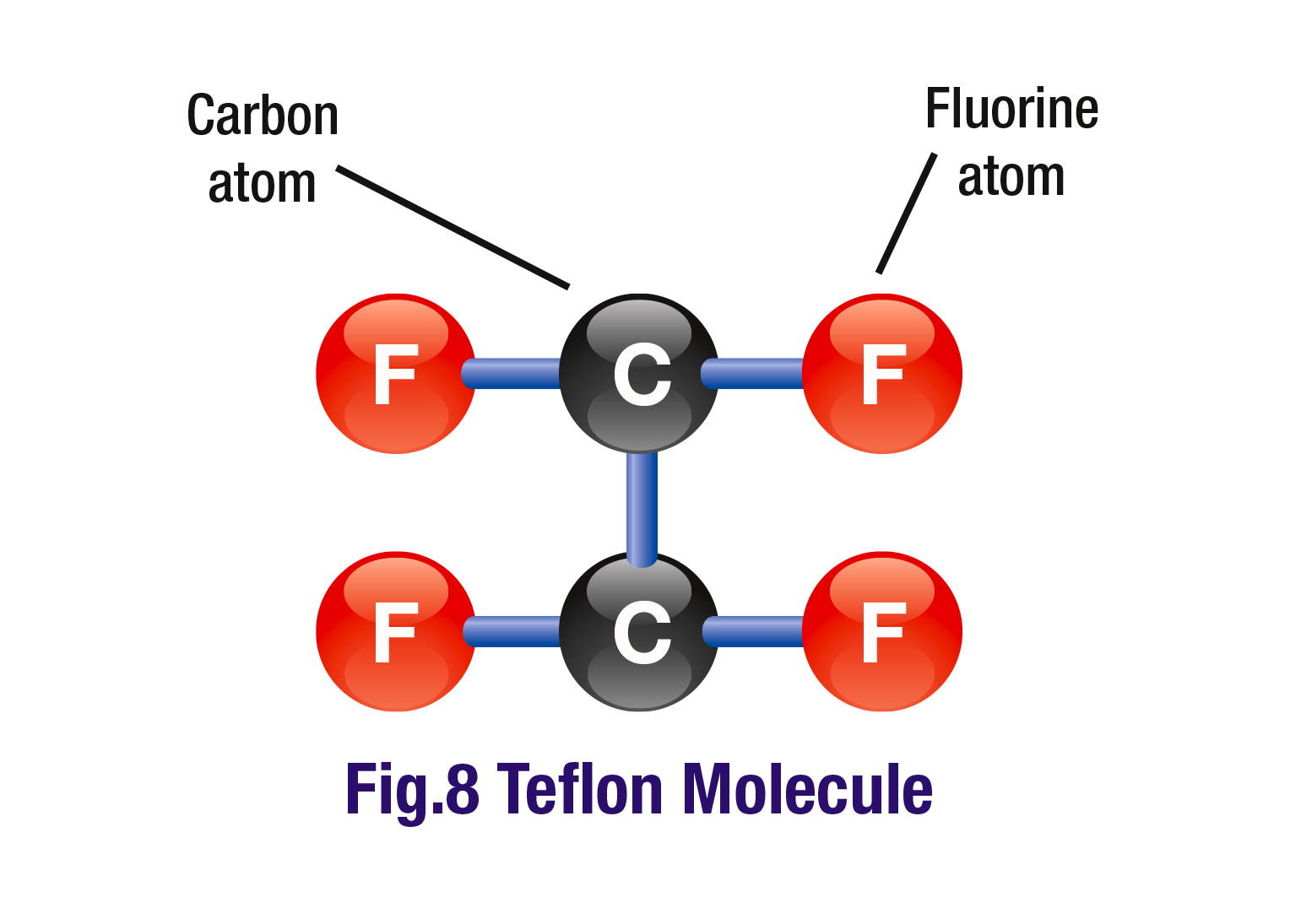 The fluorine atoms bond very strongly to the carbon atoms and to each other, making it extremely stable and resistant to degradation. These bonds also engender the ability to “cold flow”, or change dimension when pressure is applied. Teflonʼs low friction coefficient, or “slipperiness”, results from the nature of the fluorine atoms to repel any other kind of molecule. Teflon repels virtually everything except other Teflon molecules. 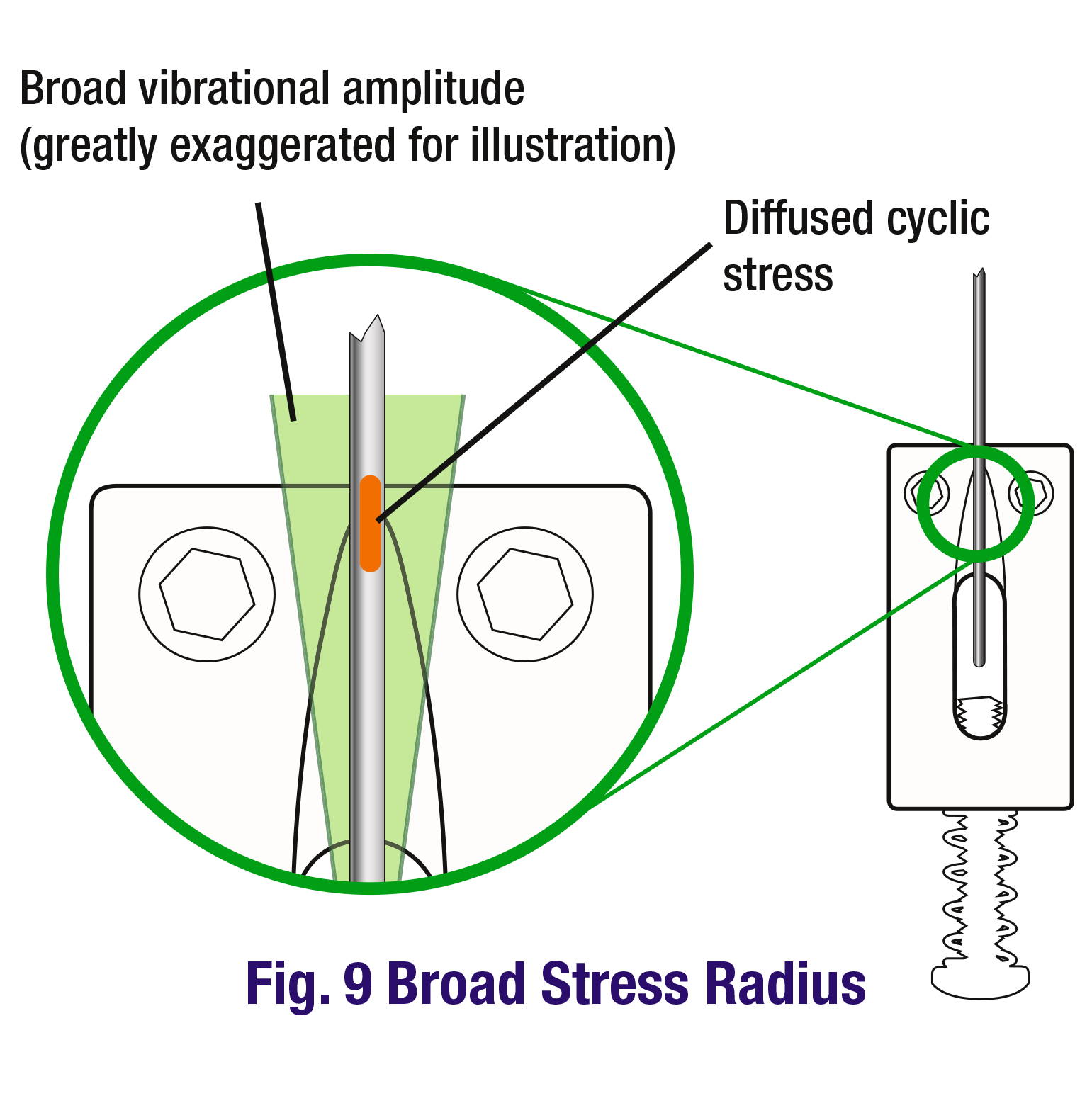 This is accomplished using a saddle manufactured from an engineered resonant base material impregnated with Teflon. In the application of a saddle lubricant, the Teflon in the saddle forms a repellent barrier, “pushing away” the molecules of the saddle and the molecules in the string, preventing the molecular attraction and adhesion between the facing surfaces that results in string binding. 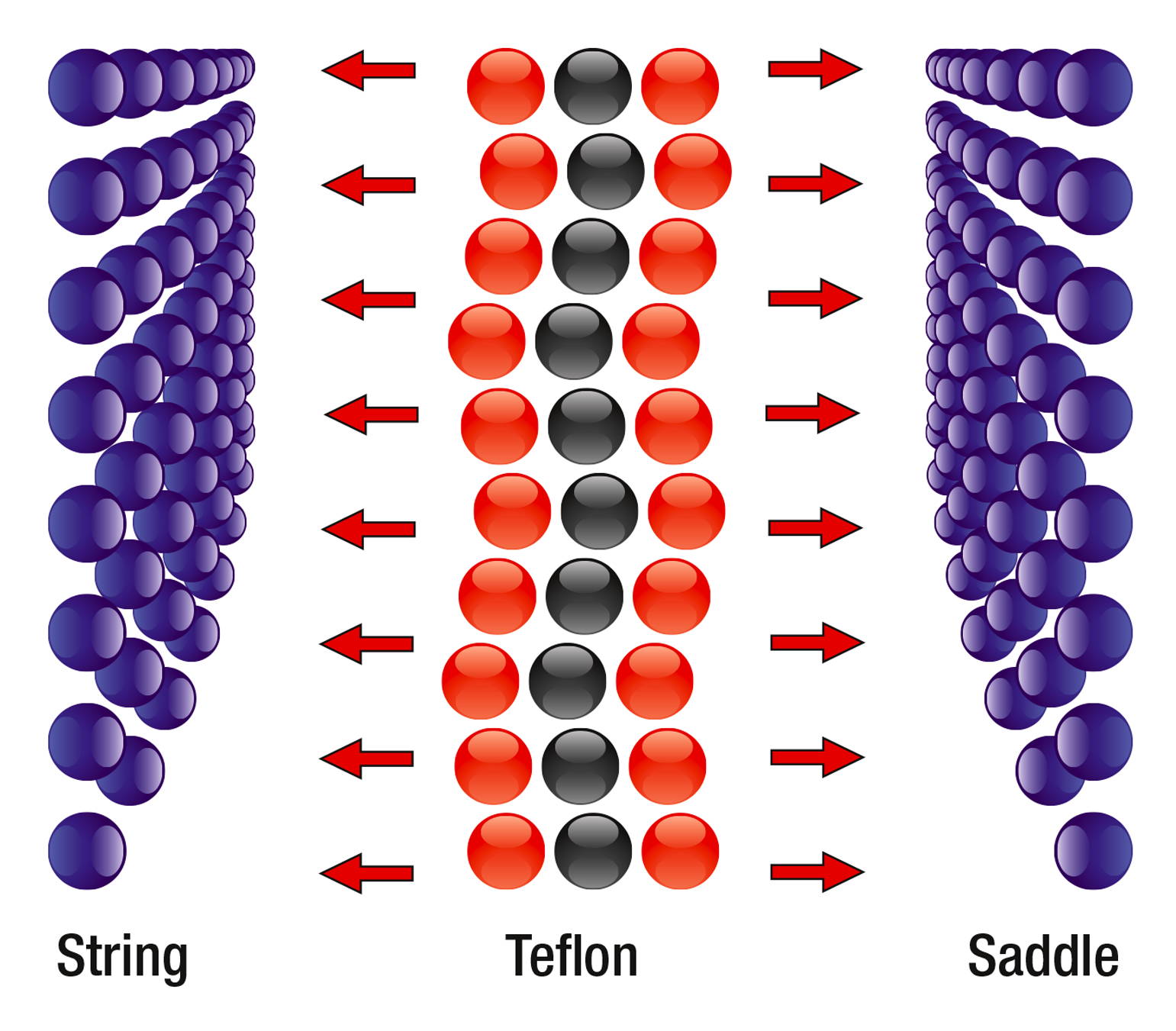 This diffuses or “dilutes” the stresses associated with elastic deformation along a greater portion of the string, lessening plastic deformation and the inherent brittleness and propensity to fatigue associated with it. Because the Teflon is impregnated throughout the entire saddle (or the String Saver insert in FerraGlide saddles), it will never dry up and the string will never run out of lubricant. 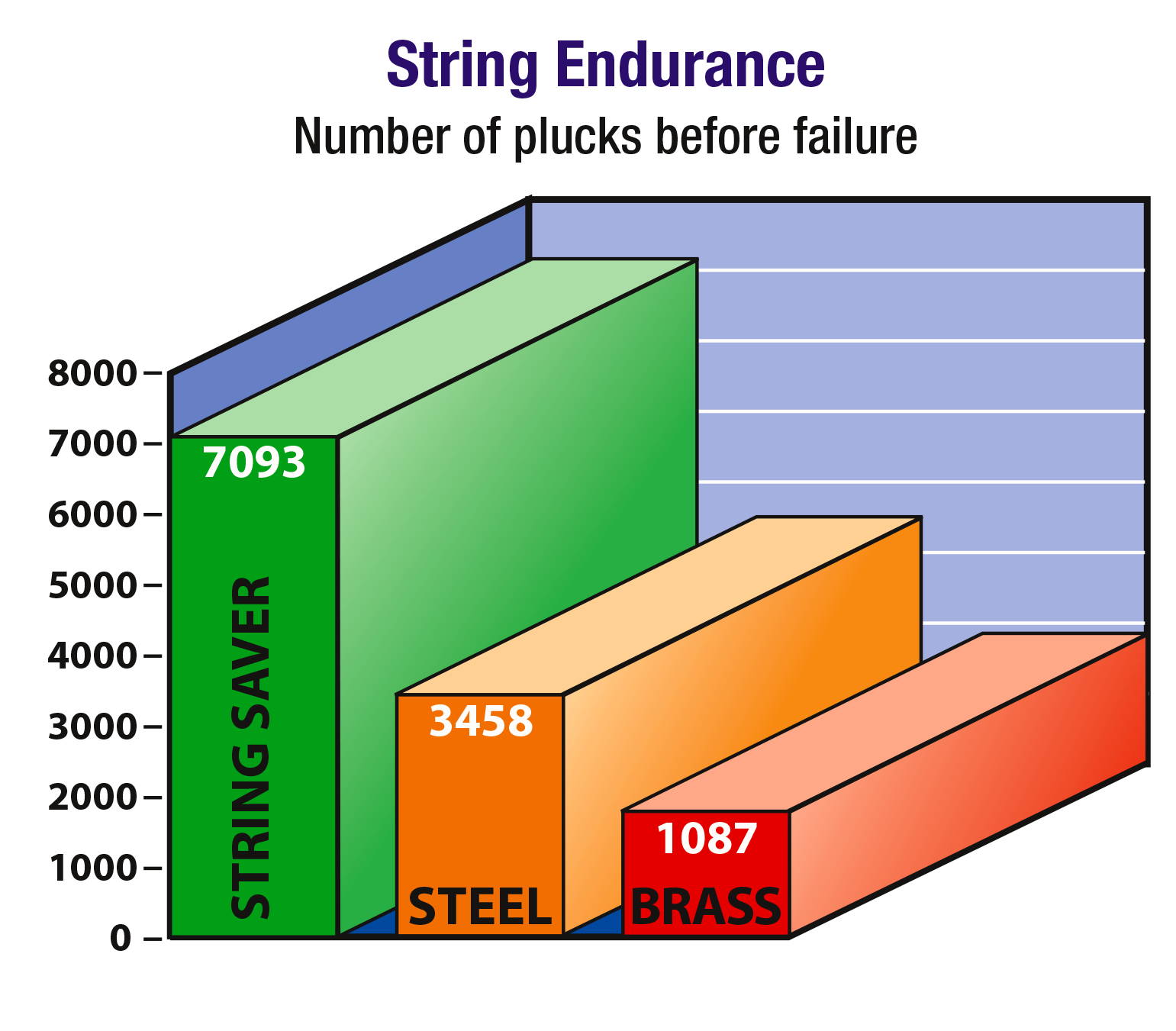 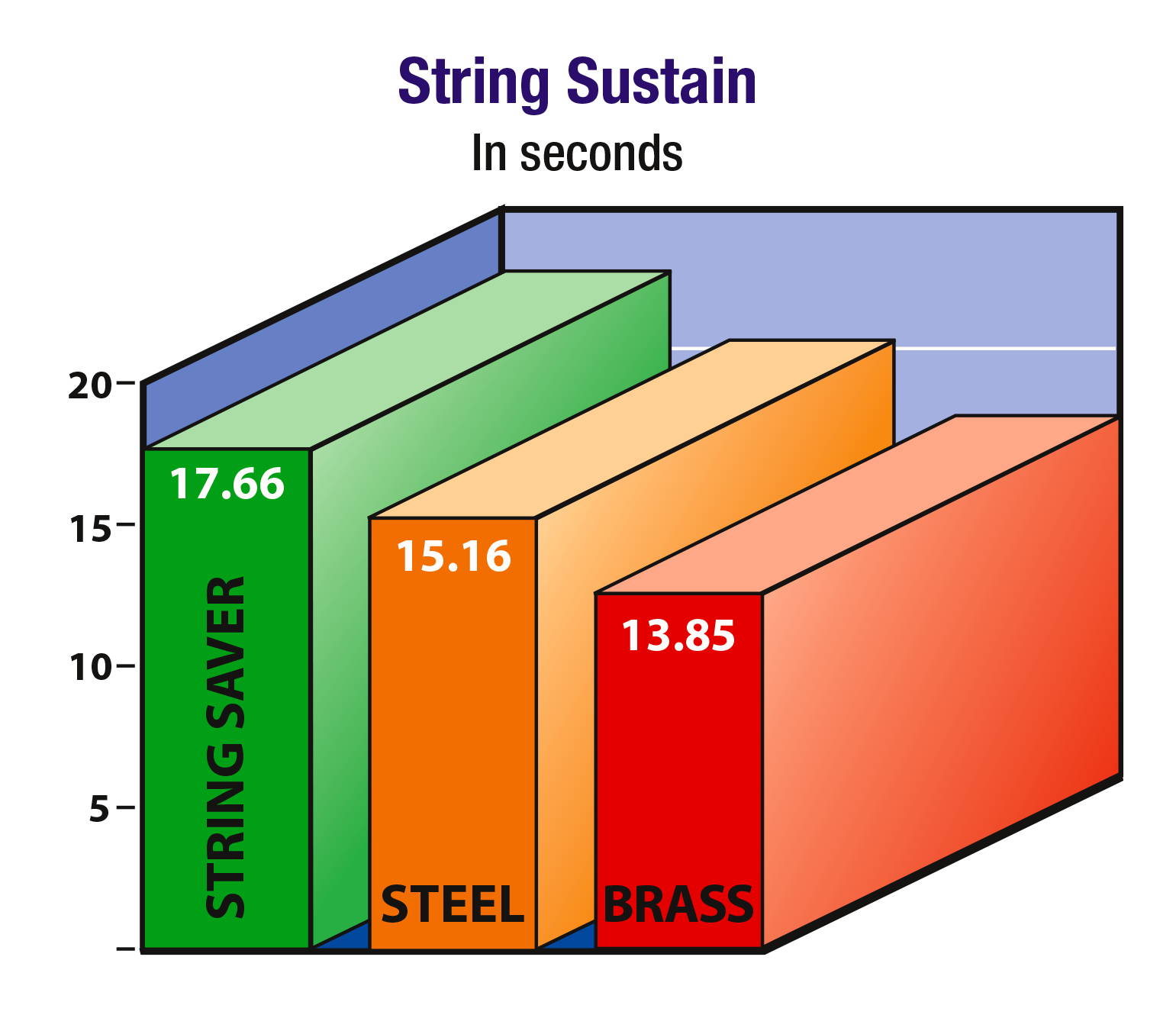 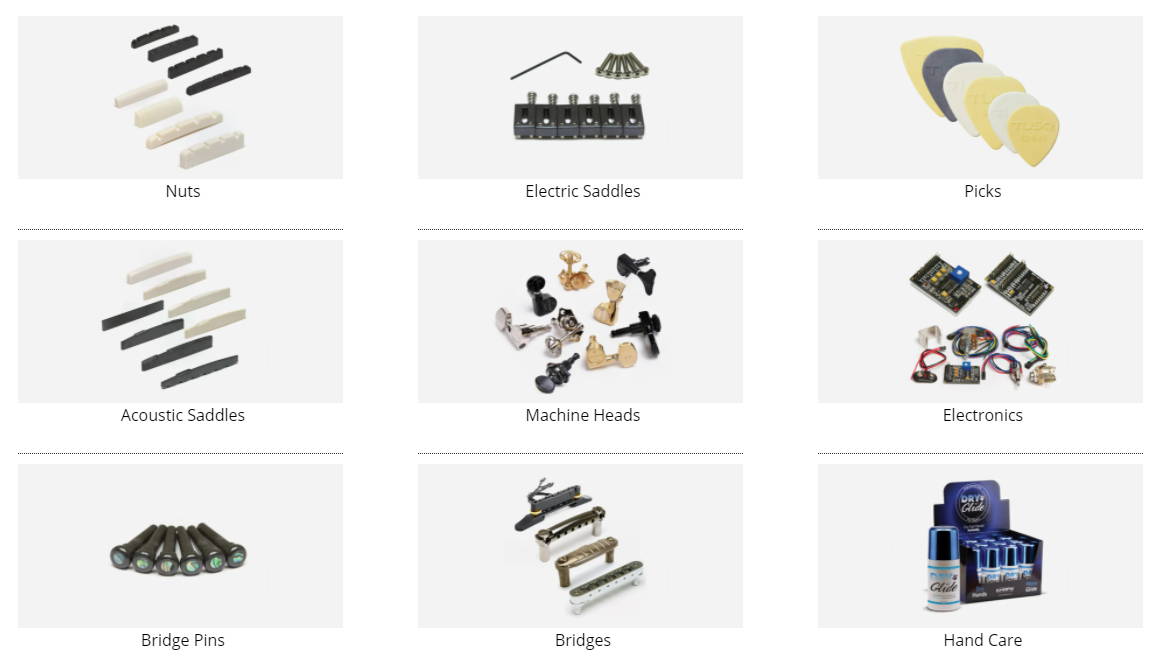